The Devil Wears Prada embarking on No Sun/No Moon Tour

Plus The Classic Crime’s acoustic video, Aaron Cole could play a show near you, and Deathbreaker starts tour this weekend… The Devil Wears Prada has announced that they’re embarking on the No Sun/No Moon Tour this fall. The tour is hitting cities across North America starting on September 29th and everyone who attends will be given [...]

Family Force 5 with The RIOT 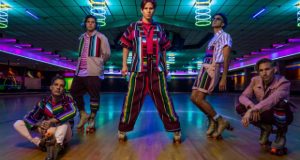 Plus For All Eternity’s Q+A, and new releases from Gideon and Deathbreaker… Family Force 5 was in studio with The RIOT on Wednesday… You can check out the full interview on The RIOT’s YouTube channel. For All Eternity did a live Q+A where they answered your questions and gave us as many details as they [...]