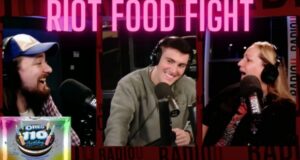 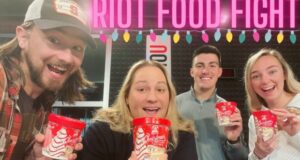 Thanks to a helpful listener named Jeff and a helpful Walmart employee, Isaia has finally acquired the Little Debbie Christmas Tree Cake Ice Cream! The question isn’t whether it will be good or not, it’s how good will it be?! [...]

The RIOT has a KING Cake 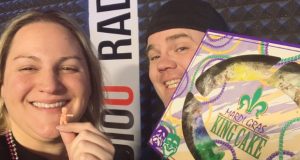 Why wait for Fat Tuesday when you can have Fat Monday? King Cake sounds like a rejected Wreck-It-Ralph character, but its actually a traditional Fat Tuesday cake. Fat? Cake? RIOT specialties! Thanks to Regan who sent us a King Cake and kicked off Fat Tuesday on a Monday! [...] 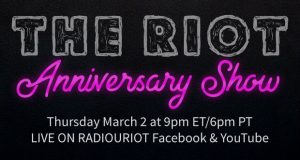 This Thursday night at 9pm eastern/ 6pm pacific, the RIOT is going to be live on Facebook and YouTube! If you haven’t yet, find us at “RadioURiot” and subscribe! We’ll be doing some taste tests and taking your questions for the show! Make sure you get yours in now by hitting us up on Facebook, [...]