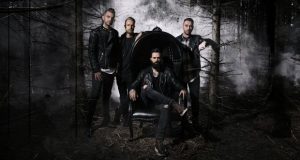 Skillet frontman John Cooper’s debut release with his heavier side project Fight The Fury is officially here! The newly formed group, which also features Skillet guitarist Seth Morrison, dropped their Still Breathing EP over the weekend and you can pick it up below. They also premiered a music video for the new song “My Demons” [...]

Plus The Devil Wears Prada performs live, twenty one pilots goes behind the video and Disciple heading out on tour… Skillet frontman John Cooper has announced that he’s branching out with a new project called Fight The Fury that he says will be harder and heavier than Skillet. You can hear a preview of what [...]