Impending Doom is in the studio 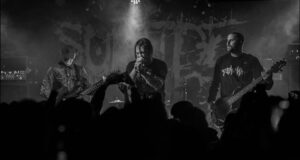 RadioU Battery band Impending Doom frontman Brook Reeves revealed on their Instagram that they are heading into the studio this week to record what will be their seventh new album and first since 2018. You can see the announcement right here. View this post on Instagram DOOM EP A post shared by Impending Doom (@impendingdoom) [...]

KB has unveiled a brand new single titled “10K” along with a new music video that can be found on his YouTube channel, The track comes as the second preview of his forthcoming record and you can hear it below. Last week it was revealed that KB has been added to the lineup for Uprise [...]

KB has been added to the lineup for Uprise Festival in Shippensburg, Pennsylvania. The event is coming up September 18th and 19th and also includes performances from Skillet, Ledger, Andy Mineo, Disciple, RadioU Battery band Impending Doom, and more. You can find more info on the Uprise Instagram. View this post on Instagram You're in [...]

Uprise Festival continues to beef up its lineup! Ledger is the latest addition to a schedule that already featured Skillet, Disciple, Andy Mineo, Impending Doom, and more! It’s coming up September 18th and 19th in Shippensburg, Pennsylvania and you can get more info on the festival’s Instagram. View this post on Instagram My Arms are [...]

Skillet reimagines Save Me

Skillet has shared a reimagined version of their hit single “Save Me” that was produced by their keyboardist and guitarist Korey Cooper. You can hear it for yourself below. It was recently announced that Skillet will be one of the headlining bands for this fall’s Uprise Festival. The two day event is happening this September [...]

Plus August Burns Red and more at iMatter Festival, Propaganda adds another live video and new music from Earth Groans… RED has unveiled a limited edition set of customizable red, white and blue merch for the summer. The new designs are only available until July 4th and you can grab yours now through their merch [...]