Just when you thought social season was over, the Social Club Misfits will be performing with RadoU Fusion artist Steve Malcolm at the 53rd Annual Dove Awards! The awards show will be taking place on Friday, October 21st, and will be watchable on TBN at 8 PM and 10 PM ET. View this post on [...]

Social szn (season) has arrived. The Social Club Misfits just released their next album Everyone Loves A Comeback Story and with twelve new tracks, there are a lot of features in to go around. You can expect to hear from Jon Keith, DJ Laz, Ryan Ellis, Tommy Royale, Torey D’Shaun, Jordan Feliz, Zach Paradis, and [...]

The social szn continues as Social Club Misfits comes out with their next single “Rendezvous” featuring Torey D’Shaun. This anthem is the perfect bop to bottle up any of those remaining summer vibes you are still holding onto. Their eighth full-length album Everyone Loves A Comeback Story is set to drop on September 30th and [...]

Social Club Misfits – Who That Is 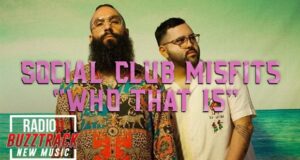 New to RadioU this week Listen, request, or buy below: WHO THAT IS? Issa new song from the Social Club Misfits that will continue to release all those summertime vibes for U. Request for the Most Wanted  As an Amazon Associate, RadioU earns from qualifying purchases. [...]

Social Season is here and the Social Club Misfits have just announced their new album Everyone Loves A Comeback Story. It’s coming out September 30th and their first single drops on Friday.   View this post on Instagram   A post shared by SOCIAL CLUB MISFITS (@socialclubmisfits) Looking for your next HBO Max binge? If [...]

Social Club Misfits has confirmed new music for next month

Social Club Misfits has confirmed that the master for their upcoming album has been turned in and a new single is coming with a release date of August 12th. https://twitter.com/SocialClubMSFTS/status/1547357538064244736?s=20&t=vhXZ_eCy_Eead4xrrLD9yg They recently had their song “Luau” featured in the new HBO Max movie Father Of The Bride.   View this post on Instagram   A [...]