Norma Jean announced their new album Deathrattle Sing For Me is set to release on August 12th and they already got a new single from it titled “Call For The Blood” that you can hear in the Battle Of The Buzz this week. ﻿ They’re also joining idle threat, Emery, Oh, Sleeper, and more for the Labeled Fest [...]

The Devil Wears Prada just announced that you can pre-save their new single “Salt” which is set to drop on Tuesday, June 7th. Once it releases you’ll be able to find it in the U Music Store. 5 days🧂https://t.co/bdX55N5wkK — The Devil Wears Prada (@TDWPband) June 1, 2022 Last month they announced plans for a [...]

Cory Brandan of Norma Jean and his brother Matthew have started a new band known as orphantwin. They will be releasing their album Future Classic through Solid State Records on June 3rd and you can hear the first two songs below. ﻿ Speaking of Norma Jean, they’ll be joining idle threat, Emery, Oh, Sleeper, and [...]

The Devil Wears Prada has announced plans for a summer headlining tour of North America. They have dates scheduled throughout August and September and each show will include full performances of their Zombie and ZII EPs. More details are available below. https://twitter.com/TDWPband/status/1523667646058668033?s=20&t=CaRMhEvqDhCtd3OTsYJrcg They also recently revealed that they will be performing at So What?! Festival [...]

Wolves At The Gate shares a final preview of Eulogies 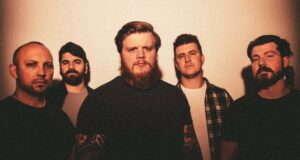 With about a week to go until they release their new album Eulogies, Wolves At The Gate has shared one final preview. You can check out the track “Deadweight” right here. They also recently unveiled the track “Lights & Fire” as well as a new music video to go with it. You can see the [...]

Wolves At The Gate has premiered a new single titled “Peace That Starts The War” off of their forthcoming album Eulogies. You can listen to it below. Last month, they also unveiled the track “Lights & Fire” as well as a new music video to go with it. You can see the visual for yourself [...]

Wolves At The Gate previews Eulogies

Wolves At The Gate has premiered the new single “Lights & Fire” as another taste of their forthcoming album Eulogies. They also unveiled a new music video for the track, which can be seen on the Solid State Records YouTube channel. The new record Eulogies is scheduled for release on March 11th and will include [...]

Silent Planet has premiered an official music video for their hit single “Panopticon” off of their latest album Iridescent. You can see it for yourself on the Solid State Records YouTube channel. Iridescent dropped earlier this month and includes “Panopticon” as well as their popular jam “Trilogy” and ten other brand new songs. You can [...]

Wolves At The Gate just released their first new Christmas song in seven years! It’s titled “Lowborn” and you can find it below and on the RadioU Christmas Channel. ﻿ Earlier this month the band revealed the release date, title, cover art, and tracklist for their next album. Eulogies will be out through Solid State [...]