RadioU Fusion artist Steven Malcolm has announced that he’s hitting the road for his first-ever headlining tour this summer! He has dates scheduled across the eastern U.S. this July and August, including a show for RadioU Columbus on July 28th. Full dates and details can be found through his Twitter. https://twitter.com/stevenmalcolm/status/1138458701952684036 If you’re looking for [...]

The weekend brought us tons of new music from RadioU Fusion artists, lead by Andy Mineo, who shared the song “Anything But Country” from his Work In Progress project. You can check it out below. https://twitter.com/reachrecords/status/1135993657151107075 Aaron Cole released the first new single from his forthcoming album. You can hear “Fasho” right here. Byron Juane [...] 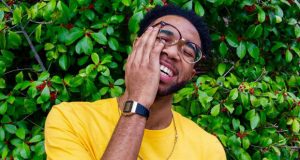 RadioU Fusion artist Byron Juane just premiered a brand new track titled “Honey” over the weekend. You can see the official lyric video for the new track on his YouTube channel. The song is a part of his newly announced Hopeful Soul EP that is scheduled for release on May 31st. The record will feature [...]

Steven Malcolm gets Even Louder

RadioU Fusion artist Steven Malcolm just came out of nowhere to drop his brand new single “Even Louder” that features the voice of Natalie Grant. You can check it out below. Malcolm also recently revealed that he’s hitting the road for the Fuel For My Fire Tour. He’s got shows coming up across the eastern [...]

Steven Malcolm takes you to SXSW

RadioU Fusion artist Steven Malcolm was a part of South By Southwest in Austin, Texas last week and now he’s giving you the opportunity to experience the event through his eyes. He’s posted his vlog from the festival and you can check it out on his YouTube channel. Earlier this year, Malcolm dropped his new [...]

The wait is over for the new album from RadioU Fusion artist Steven Malcolm! His new project The Second City is out now and features 15 tracks that tell his story of dealing with the loss of his father and the pain, anxiety, and depression that has come with the situation. You can download it [...]