Red is back with their new single “The War We Made” that comes as the third preview of the forthcoming album Declaration. They’ve also premiered a music video that you can see on their YouTube channel. Declaration is scheduled for release on April 10th and comes as the band’s first full-length independent release. Pre-orders are [...]

Red has set a release date for their next full length album! Declaration will be here on April 10th and you can put your pre-order in below. You’ll also be able to get a preview of the new record this weekend when they premiere the new single “Sever.” SEVER off of our upcoming new album [...]

Zauntee is hitting the road for the holidays

Zauntee is gearing up to hit the road with RadioU Fusion artists V. Rose and Young Noah for the Family Business Christmas Tour. They have shows coming up throughout the month of December and you can find the dates and details on his website. https://twitter.com/Zauntee/status/1198427204494995457?s=20 After the holidays, he’ll be heading out on the Winter [...]

New RadioU artist Zauntee just premiered a brand new music video for his single “Fanatic” exclusively through Apple Music. You can link up to it below. https://twitter.com/Zauntee/status/1192675639733739520?s=20 You’ll have a great chance to catch Zauntee live coming up in 2020! He is scheduled to join Red, Andy Mineo, and several other big name artists on [...]

Out today is Red’s much anticipated fourth full length album Release The Panic on Essential Records. We’re giving away a free copy every hour today, so make sure you’re listening for a chance to win. Red is currently out on the Winter Jam Tour through March 30th with a stop in Tulsa, OK. on March [...] 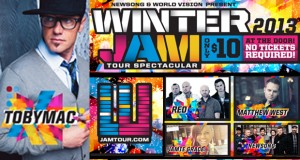 The 2013 Winter Jam Tour is in full swing. Among others, the tour features Red who are gearing up for the release of their next album Release The Panic on February 5th. Winter Jam runs through March 30th, including a stop this weekend in Columbus, Ohio and Oklahoma City on March 2nd. [...]

Red has released a lyric video for a new song off their upcoming album Release The Panic. The song is called “Perfect Life” and you can snag the deluxe version of the album when it drops on February 5th. Red has also leaked the song “Release The Panic” and they’ll be kicking off the Winter [...]