Everything In Slow Motion

Making music during the pandemic has affected everyone differently and today we chat with Shane from Everything In Slow Motion about how it has affected them. We also get a peek at release day celebrations when you can’t have an album release show. [...]

Everything In Slow Motion previews Influence

Everything In Slow Motion has unveiled the song “Satellite” as the third preview of their forthcoming record Influence, that’s scheduled for release on October 16th. You can check it out right here. ﻿ The new project will be the first new release from the band since they gave us Laid Low in April of 2016. [...]

Everything In Slow Motion – Influence 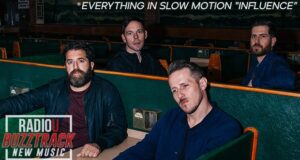 New to RadioU this week Listen, request, or buy below: Everything In Slow Motion‘s new single “Influence” was a smash hit in RadioU’s Battle Of The Buzz and now they’re getting the chance to make their mark on the main playlist! Aaron Stone from My Epic joins them on the new track that you can hear now [...]