JIMMY ROCK to release another remix to RadioU favorite, “Vibes”

JIMMY ROCK is gearing up to put out another remix to his song “Vibes” with DJ and producer Gui Brazil on Friday, October, 28th and the pre-saves are available now. View this post on Instagram A post shared by JIMMY ROCK (@jimmyrockmusic) See the interview The RIOT had with JIMMY ROCK earlier this year. [...]

JIMMY ROCK has been nominated for Best DJ at the Cleveland Music Awards and voting is open now.   View this post on Instagram   A post shared by JIMMY ROCK (@jimmyrockmusic) Did you miss our interview with JIMMY ROCK? No worries, we got it linked below. [...]

JIMMY ROCK wants you to catch these hands

Last week, DJ and producer JIMMY ROCK dropped the remix to his song “Catch These Hands.” Now, this has a few features on it so expect some heat. ﻿ He also recently performed a show in Kenya that you could watch below. [...]

JIMMY ROCK has released a new version of the Light Ends Darkness song “Move” which will be featured on his forthcoming remix album. You can hear it below. ﻿ Last month he revealed that he will be releasing one new single every month until his full new World Of Vibes: Remixes EP drops in July. [...] 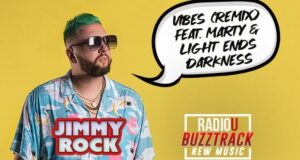 New to RadioU this week Listen, request, or buy below: Please welcome DJ extraordinaire JIMMY ROCK to the playlist! His new remix of “Vibes” featuring Light Ends Darkness and Marty from Social Club Misfits is party-worthy pop-EDM overflowing with optimism and you can hear it now on RadioU! Request for the Most Wanted  As an Amazon [...]