Lacey Sturm has added a rare pair of shows to her upcoming schedule. You can catch her live in Pennsylvania at drive-in concerts on September 18th and 19th. More info and tickets can be found below. ‼️PLEASE NOTE‼️ @LaceySturm has been added as support to both of our @SmithAndMyers drive in shows in Scranton on [...] 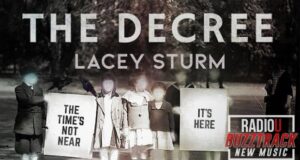 New to RadioU this week Listen, request, or buy below: It’s been nearly four years since we heard new music from Lacey Sturm, but she’s finally back and better than ever! Her first new single since 2016 is “The Decree” and you can hear it now on RadioU! Request for the Most Wanted  As an Amazon [...]

Lacey Sturm returns with The Decree

Lacey Sturm just dropped her first solo single since releasing Life Screams in 2016. The new track is titled “The Decree” and you can check it out right here. Lacey and her husband, Josh, have also done numerous live streams and acoustic performances from home over the past couple of months. You can find them [...]

Lacey Sturm has announced that she’s hitting the road for a rare set of tour dates coming up next month. The tour runs from September 21st through October 1st and even includes a show in Columbus, Ohio on September 22nd. All the dates and details can be found on her Facebook page. ﻿ Back in [...]

Lacey Sturm just released her first new music in quite some time! She and her husband Josh recently put out a new album with twelve songs that serve as a soundtrack for her Reflect Love Back video series. You can purchase the new record exclusively through the link below. https://t.co/teA1Uj9BiR pic.twitter.com/w10RIYsW4k — Lacey Sturm (@LaceySturm) [...]

Another summer festival lineup has been unveiled! Joshua Fest has announced this year’s program and this time around the schedule is highlighted by the likes of Lacey Sturm, Disciple, and Fireflight. ﻿ Remedy Drive, AC & Brady, Canon, Neon Feather and many more are also on the docket with more additions still possible. The festival [...]

Fireflight is working on their first album in four years

Fireflight is back in the studio working on their first full-length studio album in nearly four years! They are currently in the writing stage of the process and they’ve enlisted Josiah Prince from Disciple to assist with the new music. They’ve been sharing updates and you can follow their progress on their Instagram. View this [...]

Plus The Classic Crime releases “Not Done With You Yet” video, Aaron Cole posts live performance, and War Of Ages frontman talks Alpha… RED and Lacey Sturm’s Unstoppable Screams Tour gets underway in Columbus and continues through April 15th. You can find the full list of dates and details on their Facebook page. The Classic [...]

Plus Glasslands premieres video fro “Misery Game,” Remedy Drive’s “Warlike” video, and Darkness Divided announces farewell tour dates… Lacey Sturm just announced that when she hits the road with RED next month, she will be offering you the opportunity to have a VIP meet-and-greet with her. If you want to find out more, head to [...]