Thrice is running a remix contest for their song “Blood On Blood” where the winner will receive a merch bundle that includes vinyl from the band, tickets to a future show, and more. Submissions must be made by July 13th and you can find out more on their Twitter. Put your musical remix talents to [...]

Switchfoot’s Covers EP is out now

It’s finally release week for Switchfoot’s Covers EP. The record features the band’s own spin on six new tracks, including “Swim Good” and “Harmony Hall,” and you can grab it for yourself right here. Speaking of covers, Switchfoot’s Jon Foreman teamed up with Thrice’s Dustin Kensrue a few weeks ago for a new #DistancingDuet where [...]

Switchfoot has shared their rendition of the song “Harmony Hall” as the second new track from their Covers EP as they continue their plan to share one new song from the record each week leading up to its release on June 19th. You can hear both of the new tracks and pre-order the album below. [...]

Switchfoot has announced plans to release a new covers EP on June 19th and they’ll be sharing one new song from the record each week leading up to its release. You can hear their rendition of the track “Swim Good” below. Speaking of covers, Switchfoot’s Jon Foreman teamed up with Thrice’s Dustin Kensrue just a [...]

Switchfoot’s Jon Foreman teamed up with Thrice’s Dustin Kensrue for a new #DistancingDuet where they cover the classic song “In Your Eyes.” You can find it along with the rest of Switchfoot’s #LiveFromHome series on their YouTube channel. Last month, the band offered up some new music when they premiered a new version of the [...]

Thrice posts a live visual for Image Of The Invisible

Thrice just unveiled a new music video for their song “Image Of The Invisible” from their 2005 album Vheissu. The visual is comprised of footage from their recent Vheissu 15 Year Anniversary Tour and you can see it on their YouTube channel. The band also shared thoughts and memories associated with Vheissu on their social [...]

Thrice has been sharing thoughts and memories associated with their hit album Vheissu on their social media as we near the 15 year anniversary of it’s release. You can check out tons of behind the music content by following them on Twitter. In this next video of our Vheissu 15 Years series, we talk about [...]

Thrice’s Dustin Kensrue and Teppei Teranishi recorded special acoustic versions of their songs “Black Honey” and “Beyond The Pines” at a recent tour stop in London. You can find video of the performances below. The band will be returning to the U.S. for their next American tour in 2020 to celebrate the 15 year anniversary [...]

An interview with Dustin and Teppei of Thrice

Dustin Kensrue and Teppei Teranishi of Thrice recently took the time to sit down with Substream Magazine for a video interview where they talked about their ever-evolving sound, the band’s rare longevity and a whole lot more. You can check out the video below. Check out our interview with @Substream!https://t.co/ZwinpKB5fD — THRICE (@Thrice) February 6, 2019 Thrice [...] 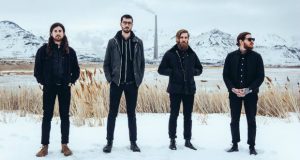 Plus Thrice breaks down their new album, P.O.D. premieres a new song and Thi’sl is in the hospital… Get ready for new music from The Devil Wears Prada! They’ve been signed to Solid State Records and will soon be releasing their next album through the label. They’ve also just kicked off their tour with Fit For [...]