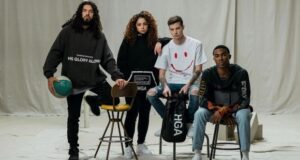 Fall is in full swing and KB’s apparel company Native Supply just dropped their first installment of their “Fall Collection ’22” with thirteen new pieces added including a letterman jacket, tote bag, and backpack. You can view the entire collection HERE. View this post on Instagram A post shared by Native Supply (@nativesupply_) Looking for [...]

Since the release of KB‘s Gospel album His Glory Alone in 2020, fans have been patiently awaiting the next. Earlier this week on his Instagram, KB gave us a first look at one of the songs on his new album which does not currently have an official release date or name. He is offering the [...]

Worshiping in the mosh pit just got a lot hotter. KB announced that he’s headlining a tour this fall called Glory Nights and Trip Lee is coming along for this 15-city ride.   View this post on Instagram   A post shared by K to the 2nd letter (@kb_hga) We had the opportunity to see [...]

Wande just dropped a flashy new music video for her latest single “They Didn’t Know II.” You can see it for yourself on her YouTube channel. Back in January, Wande, Tedashii, Trip Lee, 1K Phew, and several other artists teamed up to put out the three song We Are Unashamed EP in celebration of 1-16 [...]