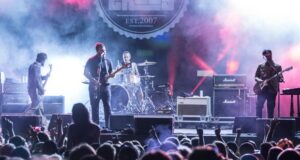 Last time we heard from the band Thrice they were headed out on a European tour, but now they’ve got a new single set to come out on Tuesday, September 20th. “Open Your Eyes And Dream” is their third single of 2022 and can be pre-ordered and pre-saved below. View this post on Instagram A [...]

Thrice is going on a Europe and UK tour later this year that includes stops in London, Manchester, Berlin, and the Netherlands. If you want more info, you can find it on their Twitter. Tickets + VIP for our UK/EU tour with @Coheed and @ToucheAmore are ON SALE NOW at https://t.co/qSHX8FT0oo. See you this fall! [...]

Thrice has released a brand new track titled “Dead Wake” as well as an acoustic version of their hit single “Scavengers.” You can find both right here. ﻿ They were also recently announced as a headliner for Furnace Fest in Birmingham, Alabama this September. They’ll be playing their hit album The Illusion Of Safety in [...]