Andy Mineo just gave us another new track as part of his Work In Progress project. The newest unfinished song he’s sharing is titled “1988” and you can hear it as well as a podcast about it by linking up right here. https://twitter.com/AndyMineo/status/1149712679784931328 So far he’s unveiled four cuts from the record, which will be [...]

Fit For A King, Andy Mineo and more scheduled for Uprise Festival

Uprise Festival is slowly and surely unveiling their lineup for this year’s event. So far we know that Fit For A King and Andy Mineo will be on hand with several other artists and bands still to be announced. The annual two-day festival is taking place in Shippensburg, Pennsylvania this September and you can stay [...] 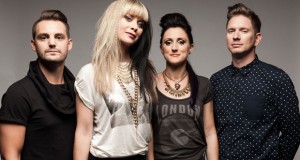 Plus The Classic Crime streams free from Seattle, Paper Route’s making of “Laugh About It” video, and Uprise Festival adds Skillet, Disciple Fireflight recently posted a picture on their social media that suggests that they are working on a new acoustic EP. We don’t have an official release date yet but we’ll let you know [...]