The Steadfast & Friends virtual festival happened this weekend and included performances from Danger Scene, Crusoe, Faintheart, and many more. You can find the full stream for free on the Tuned Up YouTube channel. This summer, Danger Scene shared a video that gives you a closer look at the lyrics and background of their latest [...]

Danger Scene, Crusoe, and Faintheart have just been announced as performers for the upcoming Steadfast And Friends virtual festival. The live stream event will take place on October 17th and you can watch it all for free! More info can be found below. This is going to be our first virtual festival. Put it in [...]

Just a few days after releasing the song “Fallen,” Spoken has unveiled another new track from their next album. They just posted a lyric video for “Nightmare” and you can find it on their YouTube channel. The band premiered “Fallen” this past weekend, and the tracks “Awaken Me” and “The Way Back Home” have each [...]

Danger Scene just shared a video that gives you a closer look at the lyrics and background of their brand new single “Never Lost My Love.” You can check it out on their YouTube channel. The duo dropped the track late last month as their first new single of 2020. They’ve also premiered a music [...]

Disciple recently hit the 500 supporter milestone on Patreon and to celebrate they are hosting a special acoustic live stream concert. The show will be viewable to supporters only, but you can still sign up and get access below. https://twitter.com/disciplerocks/status/1269295232803311616?s=20 Your next chance to catch the band live is coming up this July, when they’re [...]

Spoken has unveiled another new single from their forthcoming tenth studio album. “Fallen” follows “Awaken Me” and “The Way Back Home” to become the third taste of the new record, and you can hear all three tracks below. If you missed it, they recently joined The RIOT in the studio to introduce the new members [...] 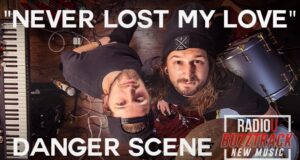 New to RadioU & RadioU TV Listen, watch, vote, or buy below: Danger Scene is back and better than ever with their emotional anthem “Never Lost My Love.” You can hear their latest on RadioU and see the video now on RadioU TV! Request for RadioU Vote for RadioU TV As an Amazon Associate, RadioU earns [...]

Danger Scene just dropped “Never Lost My Love” as their first new single of 2020. They’ve also premiered a music video for the song that you can see on RadioU TV! The duo is scheduled to be a part of the free Kingdom Come Festival in Greentown, Indiana this July. Disciple, Death Therapy, Spoken, and [...]

If you had an album wall, what would you put at the top? After this interview, we know exactly how Danger Scene would answer that question. We also hear about their new music video (coming soon) and their plans for their long awaited full length album! Danger Scene joins The RIOT!! If you had an [...]