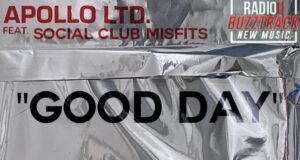 New to RadioU this week Listen, request, or buy below: Apollo LTD‘s upbeat jam with Social Club Misfits is the perfect pick me up if you’re dealing the January blues! Hear their new single “Good Day” now on RadioU! Request for the Most Wanted  As an Amazon Associate, RadioU earns from qualifying purchases. [...]

Apollo LTD recently premiered a new single titled “Good Day” that features a guest appearance from Social Club Misfits. You can hear it below and in the Battle Of The Buzz next week! ﻿ The track comes as a preview of their newly announced sophomore album Nothing Is Ordinary. Everything Is Beautiful. The record is [...]

We just got some more new music from Apollo LTD! “Better” is out now and clicks in as the band’s fifth new single of the year. You can hear it for yourself below. ﻿ Last month, the duo premiered the director’s cut of the music video for their hit single “You.” The new version includes [...]

Disciple’s Love Letter Kill Shot Deluxe Edition is now available. The new release features three brand new songs, including their hit single “Darkness Dies.” You can add it to your collection below. ﻿ This summer, the band hosted a live stream show in which the setlist was chosen entirely by their fans! If you missed [...]

Skillet’s Victorious: The Aftermath is out now! The deluxe edition of their 2019 hit album includes remixes, reimagined tracks, and more. Also available now is the band’s second graphic novel, Eden II: The Aftermath. You can grab the new record below. ﻿ Coming up next month, the band will be embarking on a tour that [...]

Disciple’s Love Letter Kill Shot Deluxe Edition will be out on September 18th and they’ve shared another song from the album titled “Kingdom Come.” You can hear it and put your pre-order in below. ﻿ Last month, the band hosted a live stream show in which the setlist was chosen entirely by their fans! If [...]

Skillet has added to more drive-in concerts to their fall touring schedule! They’ll be hitting two different cities in Pennsylvania this October in addition to their previously announced shows in Texas. Tickets and info can be found below. https://twitter.com/skilletmusic/status/1298276065627037698?s=20 They also recently announced that they are releasing Victorious: The Aftermath on September 11th! The deluxe [...]

Apollo LTD shares an extended video for You

Apollo LTD has premiered the director’s cut of the music video for their hit single “You.” The new version includes extended interviews with the people and band members in the original video and you can see it right here. Earlier this month, the band unveiled a brand new single titled “Patient” that’s all about learning [...]

Apollo LTD, Disciple and more up for Dove Awards

Apollo LTD has unveiled their new single “Patient” that’s all about learning to view setbacks as setups for what’s come. You can check it out for yourself right here. Last month, the duo premiered a new music video for their recent single “You” and launched a website that includes extended interviews with the faces featured [...]